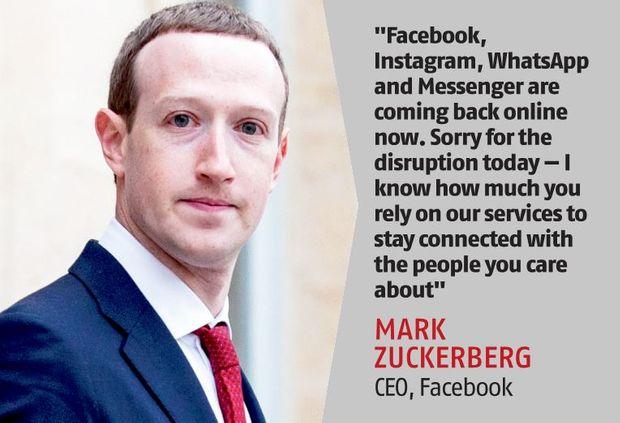 Technology entrepreneur Mark Zuckerberg has been the butt of cyberspace since Monday (4/10/2021) night after three of his WhatsApp, Facebook and Instagram applications were down. Bloomberg reported that after the three applications were down, the personal wealth of the man born on May 14, 1984 immediately dropped to around USD 7 billion or almost equivalent to Rp. 99.5 trillion.
Worse, losing that much money only happened in a short time. Losses are predicted to continue to grow if the three applications do not immediately return to normalize their services as usual.
One indicator of the loss was obtained based on the value of shares owned by Facebook . Facebook's Nasdaq Composite Index was one of those that experienced a very sharp decline of 2.1 percent at 14,255.48. The Dow Jones Industrial Average also showed a 0.9 percent decline to 34,002.92 while Facebook's S&P 500 fell 1.3 percent to 4,300.46.
According to Bloomberg, the decline in shares reached 5 percent. This is getting worse for Mark Zuckerberg because since mid-September it has decreased by 15 percent.
The decline in shares made Mark Zuckerberg's wealth corrected to USD120.9 billion or equivalent to Rp. 1,719 trillion. This decline made Mark Zuckerbeg's position on the Bloomberg Billionaires Index down to 5th position below Bill Gates. Everything is more difficult for Priscilla Chan's husband because since last September his wealth has been corrected by almost USD19 billion or equivalent to IDR270.2 trillion. According to the records of the Bloomberg Billionaires Index, the original wealth was USD140 billion or reached Rp1,991 trillion.
Not only financial loss, Mark Zuckerberg's suffering increased because he was bullied in cyberspace. Twitter's timeline is full of Mark Zuckerberg's hashtags as well as his three apps Facebook, WhatsApp and Instagram.
One Twitter user, Jim West even uploaded a Bloomberg news story about the losses suffered by Mark Zuckerberg with one striking word. "Good," he wrote complete with Mark Zuckerberg's face that looks sad.
Not only that, Mark Zuckerberg's bad luck has even been linked to the popular Netflix series Squid Game. In the upload, Mark Zuckerberg is shown as if slapping all the workers of the three applications.
There are also those who equate Mark Zuckerberg's sad face with the main character of Squid Game, Seong Gi-Hun who is sad because he has no money.
Read Also